If you have a virtual system, like VMware, and a storage device behind it you might be able to mirror your whole real / live environment and create a complete playground or shadow network to simulate any of your guest VMs like the real system and being able to change, update and adjust the configuration within this lab environment.. This is actually rather easy to accomplish and can save you a lot of headache while using it.

This is just an example, you might be able to accomplish something similar while just cloning single VMs and in theory it wouldn’t even matter if you use VMware vSphere or something like Microsoft Hyper-V. Still, it has advantages to do it this way, but let me explain it. 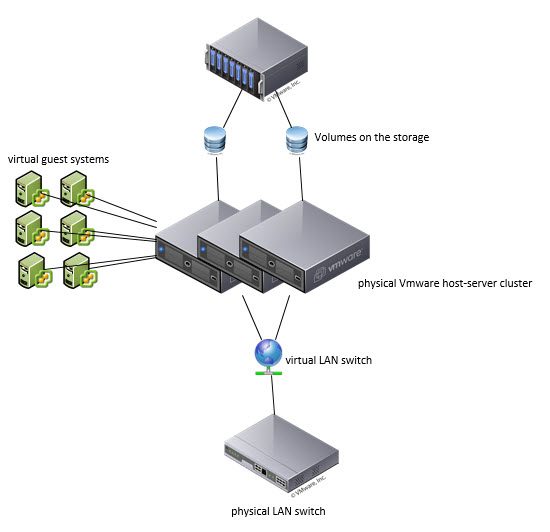 You work with an VMware environment with one or more host systems and several guest VMs. You need to update software and configurations on those guest VMs but need to test this beforehand to ensure everything runs smooth. The VMs are stored on a central storage device that can do volume-level snapshots. 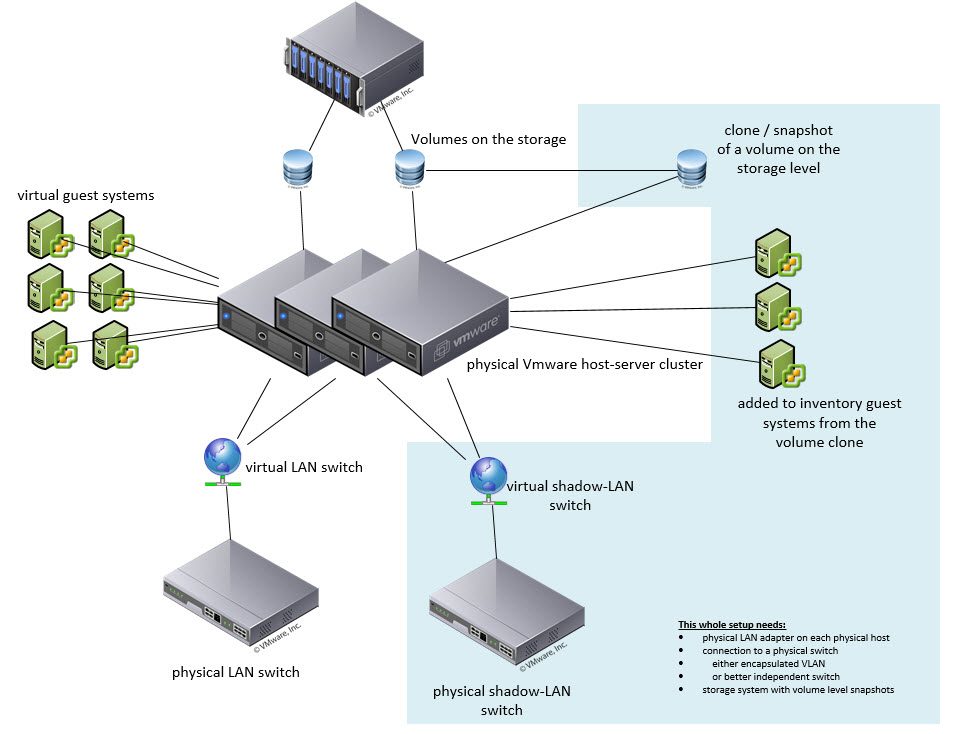 Let me give you a more detailed example on this with a few more details on what I personally used and did with this. The example you find below should help you understand the whole principle better.

Due to migrations, software updates and quality controlled systems we constantly had the challenge to test and changes and adjustments thoroughly. So I came up with the solution to just clone a snapshot on the Nimble storage array the VM resided and mounting it to the VMware cluster, taking only minutes and then moving forward to add e.g. domain controllers, DHCP servers, necessary file-system servers and the target guest system to the inventory in VMware, adjusting their name so we could quickly identify them (even adding them to resource pools if necessary) and of course most important just changing their virtual switch configuration to the shadow switch.

This now allowed to simulate the whole real world system (VMs) and simulate every change that we wanted. In order to get software there we attached if necessary VHDs that did hold what we needed or we even used a secondary internet connection to briefly connect to licensing services or update services that Vendors only provided online. The advantages of the solutions go even further:

Once setup, preparing simulations usually takes less then 30 minutes till everything is cloned, mounted, added to the inventory (incl. NIC adjust to the shadow switch) and booted up.

Why not just clone all VMs via VMware?

Good questions – the answer is simple, this would have an impact on your storage capacity, cause it would create an actual clone. And it actually takes longer to clone individual VMs then to just grab a storage-level snapshot and being able to adjust what you want down to the volume level on the storage. Even the clean-up might be more intense or leave some unwanted data back – while a clone on off the volume only needs you to remove the VM guest system from the inventory and then unmount and delete the whole shadow volume.

I did write this all up cause I wanted to share it – the whole idea is not that special in theory, but I thought it is an good example on how you can accomplish having a huge and decent lab environment with only minimal effort. In any case, I hope the idea behind it will help some off you out there 🙂